Roulette is a popular casino game. Avid gamblers play roulette online as well as at land based casinos. Following almost three centuries since it was first invented in France, roulette has come a long way. This article traces the history of roulette, from its early years in the 18th century to its present avatar online.

Roulette, which means little wheel in French, was first introduced in a primitive version by Blaise Pascal in the 17th century, when he was trying to devise a perpetual motion machine. It was in the 18th century that roulette was first introduced as a game. The game was initially formulated by fusing elements from various games, notably Roly-Poly, Ace of Hearts, EO and Hoca and Biribi, an Italian board game. The name “roulette” was derived from a French board game of the same name.

The game, in its present form, can be traced back to the late 18th century, as a novel of that period described a game as being played in Paris and the description shares a lot in common with the form presently played today. By mid 19th century, the game was taken to Germany by two Frenchmen, where the single 0 roulette table was introduced. The game was introduced at Homburg, the spa and casino centre of Germany. By the end of the 19th century, roulette had spread all over Europe and crossed the Atlantic to reach the USA and by now had become one of the most popular US online casino games in the world.

When gambling was declared illegal in most countries at the time, many casino operators had to flee to Monte Carlo, which was the only place in Europe that permitted gambling. The single zero roulette wheel was formulated at Monte Carlo.

Birth of the American Roulette version

Roulette had reached American shores in the mid 19th century and the earliest forms of the game used the numbers 1 to 28 along with a single and double zero and an extra slot called the American Eagle. The Eagle was a house slot that gave extra edge to the casino. In the later years, however, the Eagle was omitted and the table featured only numbered slots. Today, wheels with the Eagle slot are all but extinct.

Roulette also encountered various changes in terms table layout in the USA. One of the most significant was the changing of the position of the roulette wheel from the centre to the top of the table. This was made to prevent foul play by gamblers and operators at the roulette tables. The new layout, which was more simplified, became the dominant layout for playing both versions of the game, American and European.

With the evolution of the internet into a major tool for communication and entertainment in the 1990s, innovators began to introduce US online casino games , including online roulette, using gaming software that was prevalent at the time. The innovation was a success and players were now able to play roulette within the comfort of their homes. 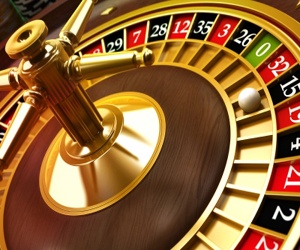 © 2020 Casinos Allowing US Players.
US online Gambling should be fun. You always risk losing the money you bet, so do not spend more than you can afford to lose. If you think you may have a problem get help.