“The one you’ve been waiting for is almost here, so make sure your bankroll is loaded before the first shuffle up and deal is called,” stated Michael Harris, spokesperson for Americas Cardroom. “The OSS features our $1 million guaranteed Million Dollar Sunday, but you’ll find over $2.5 Million guaranteed in total over 77 big events. Whatever your bankroll size might be, the OSS is the one to play.”

Get a Free OSS entry Here

This is Americas Cardroom’s ninth Million Dollar Sunday and expectations are high. While the first seven failed to cover, with many of them 6-figure overlays, the last Million Dollar Sunday in April saw its prize pool balloon to well over $1 million. Now that Americas Cardroom’s poker community is even bigger, this next $1 million guarantee is expected to break records.

The Online Super Series will likely feature several new faces as micro-stakes players were given the opportunity to inflate their bankrolls to new heights through the MOSS, the first leg of OSS Cub3d. Upon the conclusion of the OSS, Americas Cardroom will host the BOSS, the Bigger Online Super Series designed for high rollers.

Not one to rest on their laurels, Americas Cardroom is gearing up to surprise tournament players with something big. Sit & Go 2.0 launches just weeks after the conclusion of OSS Cub3d and is being described by experts as the next evolution of poker. Americas Cardroom is working with renowned poker players Collin Moshman and Katie Dozier on the development of the groundbreaking Sit & Go format. 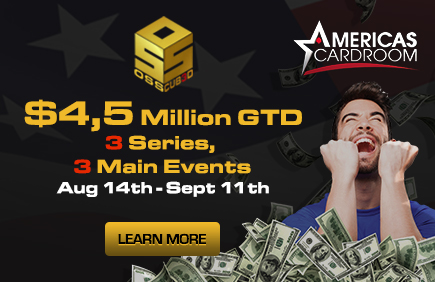