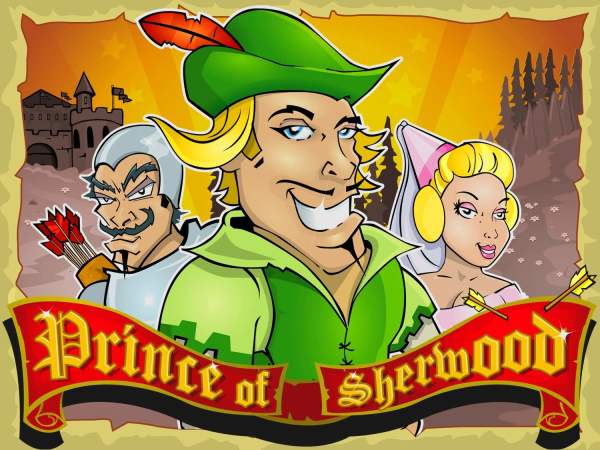 As the legend goes, Robin and his merry men lived their days in the woods of Sherwood Forrest, stealing from the rich and giving to the poor. A noble cause indeed – care to join his band and claim your own gold?

Storm the castle, protect the maiden and battle the evil Sheriff's men to survive and capitalize as one of Robin's Merry Men. Find Robin himself and your take of the loot multiplies, or find multiple Bull's-eyes to unlock the archery feature. Pick your archer and if he finds his mark, you can win free games or up to a 6x multiplier! Ride with the Prince of Sherwood, and you too may seek your own fortunes.

3 or more Archery Boards scattered Left to Right triggers the Archery Feature. The player selects one of two archers in the Archery Feature. Both archers fire one arrow at the target, to award prizes of 2, 5, 25, 50 or 100 times the triggering bet each. If the selected archer awards a higher prize than the archer not selected the player progresses to round 2.

Round 2. The selected archer fires an arrow at the target to award 5, 10, 15, 20, or 25 free games. Another arrow is then released to award x2, x3, x4, x5 or x6 prize multiplier that is applied during the free games. During free games Archery Boards pay Left to Right scatter pays as indicated. Free games are played at the lines and bet of the trigger game. The feature cannot be re-triggered. Robin Hood only appears on reels 1 and 5 and substitutes for all other symbols except scattered Castles and Archery Boards. The prize is doubled when at least one Robin Hood appears in a winning combination. Random Progressive Jackpot – A Random Progressive Jackpot can be won at the conclusion of any game and is paid regardless of the denomination played.